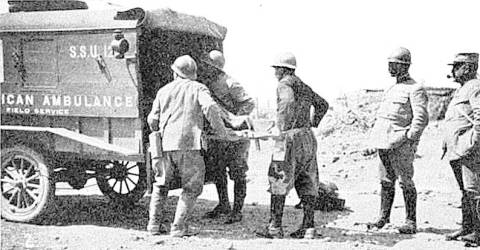 When World War I broke out in Europe on July 28, 1914, most Americans agreed with then-President Woodrow Wilson that the United States should remain neutral. This changed when the nation went to war on April 6, 1917, following Germany’s message to all nations to stay clear of the British Isles or face unrestricted war. Shortly after this announcement, several American ships were damaged or sunk by the explosion of German mines. The U.S. Senate voted 82 to 6 to declare war on Germany, with the U.S. House of Representatives approving the declaration by a vote of 375 to 50.

Residents of West Milford and other parts of New Jersey joined the rest of the nation in expressing overwhelming feelings of patriotism and a desire to help their nation in the war effort. Dr. William H. Lawrence, physician from Summit and founder of the Overlook Hospital, came up with the idea of ​​forming an ambulance corps with a large contingent of men from North Jersey. The idea was well received, with 122 men joining the group in 1917. The organization was to be identified as Ambulance Corps 33. After Dr. Lawrence offered the ambulance company to the War Department, he was informed that she would only be accepted if she was sponsored by a branch of the Red Cross.

After getting approval from the Red Cross, a training site for the newly created unit was needed. What better place than West Milford Township with its mountains, hills and lakes? The aristocratic Van Wyck family, originally from Holland – whose early ancestors in America served in the Revolutionary and Civil Wars – were based in New York State and held local and national political offices. They also owned 560 acres of vacation property including a house, gatehouse and Hennion Pond in the Apshawa section of West Milford. (Located at 256 Macopin Road, the property, some 60 years ago, was sold by the Van Wycks. It became Camp Vacamas for children and now operates as “Hands 4 Youth”, still with programs for children.)

The following information was shared by Bill Perry of Echo Lake, who received the information from his father Edwin Perry, an original member of Ambulance Unit 33. Bill, who served in the United States Navy during World War II World, will celebrate its 97th birthday on November 12.

A dozen people from Summit were the first to arrive at the Van Wyck estate in Apshawa to prepare the site for the ambulance unit. The Van Wyck family will not use the property again until the end of the war. The unit needed to prepare the facilities for the others arriving for training. Two days later, a convoy of about thirty vehicles – equipped and driven by citizens – transported men and luggage to Camp Van Wyck. Three barracks to house the men were built next to the headquarters. When the number of paramedics increased, tents were added for them.

The headquarters was a building on the western shore of the lake. It included the officers’ quarters, the general mess and the kitchen. Initial training at Camp Van Wyck continued through the summer of 917. The unit became part of the Army’s Fourth Division, but reconnaissance was not easy. For a time the society continued to operate under the American Red Cross designation. On August 31, the contingent – to much fanfare – departed for Camp Green, North Carolina, for intensive all-arms training “over the winter in unforgettable mud,” Perry said.

The men had more training in Syracuse, NY, and were back in New Jersey on May 18, 1918, to board the “Honorata” from New York Harbor for England. Perry said they docked safely in Liverpool after being attacked by an enemy submarine in the Irish Sea. After spending two nights and a day aboard the ship, the men of Company 33 traveled by train to Winchester for a supposed rest.

Two days later they went to Southampton and boarded the “Antrim” – a fast steamer which took them to LeHarve, France. Later, they engaged in intensive poison gas training. At Belleau Wood on July 2, 1918, a call came for six members of the unit to report to the front lines with the Fifth and Sixth Marine Divisions. While carrying a wounded marine, John “Jack” Dean, one of the men from Camp Van Wyck, was hit, Perry reported. A shell exploded, killing the sailor and mortally wounding Butler resident Dean.

Although Perry was not with Dean, he narrowly escaped injury. As he unloaded his ambulance, an explosive shell landed nearby, demolishing a French ambulance. A shrapnel whizzed past Perry and another shrapnel lodged in the calf of one of his legs.

On July 17, ambulances arrived and five of the company’s six officers and 40 stretcher-bearers and first aiders were dispatched to the action fronts of Noroy and Thury. The men training at Camp Van Wyck, Apshawa, were now evacuating the sick and wounded, and they were continually moving in rapid succession to stations throughout France. “First Aid Stations” have been established by the company at a range of locations.

The ambulances of the 33rd were at Marneuli en Dole. Perry’s information indicates that the number of patients treated by the company in eight days is around 2,700. They continued to work day and night.

The 33rd left on foot from the Château de la Forêt on August 14 to arrive at Montmiral the next day. Then Perry and the others traveled in trucks to Prez-sous-Lafauche, where the ambulances joined the company. The vehicles were repaired and the company was re-equipped. An extensive training program has been carried out.

By September they were back in action with “aid stations” established at three locations. One of the ambulances was the first motorized vehicle to enter Haudimont while the Germans were still in possession of part of the town. On September 28, an eight-man detachment from the unit went to the front to manually transport medical supplies due to transportation difficulties. They returned to the company on October 1. Perry said the ambulance work was accomplished under enormous difficulty, with a trip taking 42 hours.

The men of Ambulance Corps 33 saw the end of the war with the signing of the armistice on November 11, 1918. They returned with joy to the United States. For years they hosted reunion dinners in Newark and later at The Summit at the Suburban Hotel.