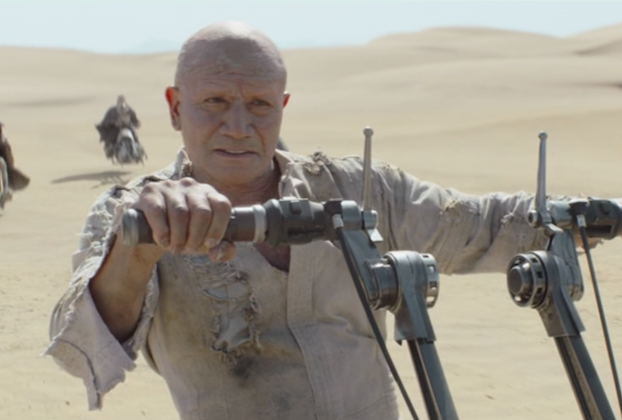 This week on Boba Fett’s Book, twin threats surfaced to claim Jabba’s territory, while in a flashback, we learned how Boba helped the Tuskens deal with a deadly problem. (I want a scoop Boba Fett, or for any other show? Email [email protected] and your question may be answered via Matt’s Inside Line.)

Considering the decent but simply “awesome” reviews of Boba FettFor the short and somewhat predictable premiere, it’s clear that Disney+ should have either screened both episodes for reviews or released them on premiere day. Because “The Tribes of Tatooine” had a parcel was happening, and was a far superior and longer TV episode.

Today’s stuff was intriguing on its own, as Boba and Fennec learned that the would-be assassin they captured in Mos Espa was a member of the Night Wind, a league of elite assassins. He kept quiet about who hired him, but when threatened with death (or worse) out of resentment (although it didn’t actually exist!), he claimed that the mayor ordered the shot.

Boba and Fennec headed into town past the butler and into the office of Mayor Mok Shaiz, an Ithorian. Presented with the assassin he allegedly hired, Shaiz (using a universal translation gimmick and voiced by showrunner Robert Rodriguez) responded with a reward for finding the bounty hunter, as the Night Wind is not allowed to operate outside of Hutt space. Boba resents being dismissed as a mere bounty hunter and makes it clear that he now controls Jabba’s criminal empire – and as such any mayor serves as daimyoit is pleasure. Shaiz replies that “before you threaten me, you should ask yourself: who really sent the Night Wind? He then pushes Boba towards the Sanctuary.

Boba, Fennec, and their Gamorrean guards head to Garsa Fwip’s cantina and ask the owner what’s what. She’s a little surprised they haven’t heard who’s in town – The Twins, like Jabba’s cousins. And as the drums of the procession resound outside, Boba and Fennec return to the street to see the twins being carried on a litter by about twenty men. What follows is a debate over who is the rightful heir to Jabba’s territory, with the twins producing a document and Boba recounting how he took it from Bib, who seized it following Jabba’s disappearance. The twin says his impatient sister thinks they should just kill Boba, as the villainous gladiator Wookie – known in star wars lore as Black Krrsantan (or “Black K”) – steps forward to introduce himself. But when Boba holds his ground firmly, the male Hutt decides bloodshed is bad for business, and that matter will be settled later.

That was only a fraction of the episode, though. Boba then hit the Bacta tank again, and his last memories of his time with the Tuskens recounted how one day, while being trained in the use of the gaff stick, a “long speeder” (or smuggler train ) rumbled in the distance. The train’s windows flew open and gunmen began mercilessly gunning down the Tuskens and their Banthas as they passed. That night, in the aftermath of the assault and after seeing fast motorbikes passing in the distance, Boba asks the chief to let him go and pursue a plan to stop the train the next time it arrives. The Chief agrees and Boba pays a visit to Tosche Station, where Nikto bikers bully a couple of terrans (Camie and Fixer, characters removed from A New Hope). Wielding a gaff stick and rifle, Boba steps in and kicks with ease all of the donkey, then flees with several speeder bikes.

Boba takes care of training the Tuskens on how to use the bikes, in a fun training sequence involving accidental ‘reverses’, pratfall drops and fear-and-fun squees. When the train next passes, Boba and the Tuskens chase after the bikes and attempt to board, while other Tuskens grab the gunmen who appear at the windows. It’s a long and exciting sequence in which some Tuskens are lost, yes, but Boba and others end up climbing on the roof of the train and taking down other gunmen, all while the engineer droid lights up at several the thrusters repeatedly, causing the train to abruptly tip forward (and also burning the occasional Tusken).

Boba goes to the mechanic’s cabin and orders him to stop the train, but the droid jumps out the window. Boba struggles to make sense of the controls, then uses his boner to pull the control lever all the way back, stopping the train. Afterwards, the Tuskens loot the train, while Boba decides to spare the Pykes who shot them/protected the contraband goods, including Sansarran spice. Boba explains that the Dune Sea is the native home of the Tuskens, and as such the Pykes will now “pay a toll” if they wish to continue crossing it. (He then sends them to march in single file toward the sun, with a single black melon each to quench their thirst.)

That night, Chief Tusken hosts an intimate ceremony in which Boba is given a tiny lizard…which then pops up his nostril and burrows into his brain to serve as his “guide”. (Even since Khan’s Wrath, such scenarios give me the heebie-jeebies. Poor Chekhov.) What follows is a trippy sequence in which Boba searches for a distant tree, the limbs of which embrace him – and which is juxtaposed with memories of him entangled in the bowels of the Sarlacc. Boba frees himself from the branches and breaks a big one. The next morning he and we realize it was not just a psychedelic dream come true, as he returns to camp with this branch in hand. He is then trained to carve the branch into the base of his own gaff stick. And after being fitted with his own Tusken wrappers, he participates in a hearth ceremony and ritually dances with the others.

What did you think of Boba Fett Episode 2?

The best of TVLine

Carpentry training center seeks to attract locals to the field