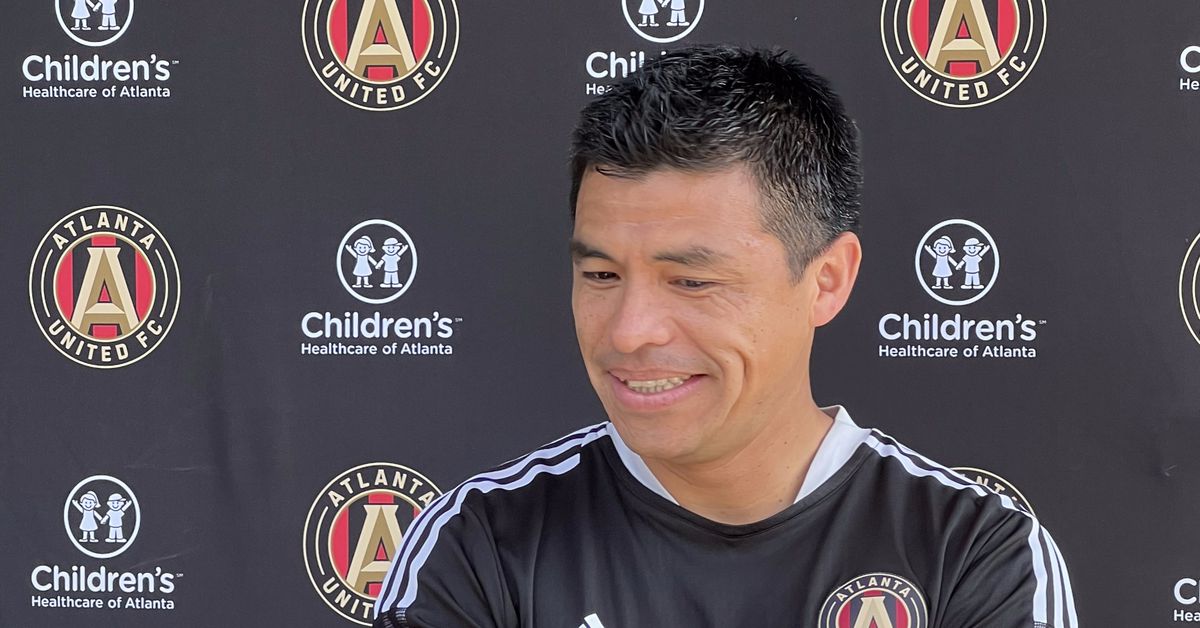 The Children’s Healthcare at Atlanta Training Ground experienced perhaps the best weather of the season on Thursday as Atlanta United took to the field to prepare for their upcoming home game against Toronto FC. A gentle wind snaked through the pitches as players exited the facility, including Matheus Rossetto, who returned to training for the first time since suffering an ankle injury against Seattle on August 6.

One player who wasn’t on the pitch, however, was Josef Martinez. As The Athletic’s Felipe Cardenas widely reported, Josef was suspended for a week by the club for what would forever be known as the ‘rice and chicken’ or ‘arroz con pollo’ incident.

(Don’t worry about how many images to search to find the right one. Besides, you’re hungry now, aren’t you?)

The Five Stripes were notably somewhat delayed in their arrival at the training ground on Thursday, but the players immediately immersed themselves in rondos and passing drills. Raul Gudiño and Rocco Ríos Novo worked separately on a variety of goalkeeping practices, including shot-stopping and passing. After full squad training, a number of players remained on the pitch to continue working on a variety of skills. Ronaldo Cisneros, Franco Ibarra and Santiago Sosa put the aforementioned goalkeepers to the test with shots from high above the arch, while Luiz Araujo, Aiden McFadden and Juanjo Purata enhanced some longer passing opportunities.

Brad Guzan even made an appearance as he got dressed and also took part in some relatively light goalkeeping drills. In true Brad fashion, however, he made his presence known as Gonzalo Pineda addressed the media with a shout on the pitch in reference to the sudden interest in the team, noted by the influx of media at the center of training. Unfortunately, controversy sells and the most recent drama involving Josef Martinez was the main topic of conversation as Pineda, Thiago Almada and Andrew Gutman addressed the media.

Argentinian prodigy Thiago Almada was the first to take the microphone. He made a point of mentioning that the team does not allow any news from both Josef and Miles Robinson to change their mindset going forward. He said the team as a whole supports each other and the situation with Josef came to a head because of the frustration of the game, stressing that it was something every player experiences. Notably, Almada said Josef had apologized to the team since the rice and chicken incident, but declined to go into specifics, stating that “what happens in the locker room stays in the locker room. . It’s a kind of code. »

-Cue Pirates of the Caribbean “they’re more like guidelines” quote-

Almada also spoke about receiving the call up to the Argentina national team, saying it was actually a bit of a surprise. The chance to represent the Albiceleste was clearly a huge deal for the youngster as he said the call-up was both a “huge joy” and a “huge honor for (his) family”. He will travel in a few weeks to join the team in friendlies against Honduras and Jamaica alongside the likes of Lionel Messi.

Atlanta United Spokesperson captain Andrew Gutman was the next player to speak, specifically saying “good afternoon” to everyone as he approached the microphone after being scolded moments before for saying “good morning” to someone. Much of Andrew’s message consisted of a “just play football and stop worrying about all the drama” vibes, which certainly should be every player’s goal at times like these.

@_andrewgutman_ mentioned that he didn’t have much to say about Josef and he was just here to play football and help the club win. Says the team still believes they can do it. He said the team still had a ton of attacking options and laughed when he was mentioned as a 1/3 #ATLUTD pic.twitter.com/3q3L5SAOqv

Gutman respectfully declined to comment on Josef’s situation (don’t blame him). Asked about communication from the front office, he mentioned that Carlos Bocanegra had not spoken to the team about the incident.

Questions then turned to Gutman’s goal and positioning, and he explained that he and Pineda had discussed taking advantage of spaces that “defenders don’t think about”. He attributed a lot of that to the fact that guys like Araujo, Cisneros, Almada and Moreno can occupy other defenders heavily, leaving him with tons of surprise zone to operate from.

After the end of the media with Gutman, Gonzalo Pineda spoke. Where Gutman and Almada could only tiptoe over the topic, it was still expected that Pineda would definitely need to elaborate on the Josef Martinez question.

Pineda said the club with him made the decision to suspend Josef. The expectation is to see him again on Monday. “I want him back”, he is a valuable player. Said Josef has yet to apologize to him. He said he didn’t feel like it was “him against me.” #ATLUTD #UniteAndConquer 1/6 pic.twitter.com/fqx4vYuFws

The Twitter post ratings above give a good overview, but you should definitely make a point of listening to Five Stripe Final with Joe and Sam (and myself as a guest) for Pineda’s comments as they go. as they happened. Gonzo mentioned that he, along with members of the front office (including Steve Cannon), all made the decision to suspend Josef after the rice and chicken incident. However, he mentioned that he really wanted Josef back and that he didn’t feel like they each saw the issue as ‘him against me’.

Of course, Josef’s frustration did not seemed directed to the coaching staff as the season progressed, either. Thinking back to Josef’s comments from Summer, the only entity he’s directly expressed frustration with is the one in charge of roster building.

Pineda, however, mentioned that Josef has yet to apologize to him. He also clarified that he had already dealt with other issues with the Venezuelan Viper, indicating that this was not the first feud of Pineda’s term. Gonzo always insisted their relationship was good, and also pointed out vehemently that he and Josef never got physical. He said they stayed 2-3 yards apart in the Portland locker room, despite early reports describing they had to be physically separated. It absolutely bears mentioning here that in a locker room full of players and staff, the definition of “must be physically separated” could have 100 definitions.

Interestingly, Pineda said that during these difficult and languid times it becomes easier to see who is truly committed to the club. Asked about the need to score goals if the team has any hope of making the playoffs, the gaffer referred to the recent Atlanta United Academy dinner where he espoused the belief system and values ​​of all the club for young children. In his eyes, how can he look these kids in the eye with this message and then put someone on the pitch just to score goals but who doesn’t show those values ​​of commitment and teamwork? Hit.

From there, Pineda was asked how the club will handle Josef Martinez in the future. His response revealed that any move was not his decision and the whole club is yet to discuss the idea of ​​next season. Moreover, he expects Josef to be back on the training ground on Monday. When questioned further, he also reiterated the same guidelines “code” that Almada mentioned earlier, holding this concept in the highest regard.

Finally, in reference to Miles Robinson’s situation, Gonzalo Pineda has just said that he couldn’t say much (probably for various reasons) but that the club, team and coaching staff fully support the defender center star.

For those looking to find out how the team is preparing for Toronto, it wasn’t that style of press conference. Whether it was a sign of the coming death knell for the season or an interior focus on everyone’s part in reference to the drama surrounding the club, the next opponent just didn’t seem to get much. of importance to fans, and this media scrum personified that sentiment. That’s not to say the team isn’t training specifically for the game; on the contrary, comments from Gutman and Almada indicated that they had a game plan, but the big news of the day would still be about Josef. (It also seems like a good time to point out that Lorenzo Insigne did not train today with Toronto due to a personal issue).

Regardless of the off-field drama, Atlanta United still have five games to play to, at a minimum, prove to a potential new president that they are not inheriting a complete dumpster fire. Players still have jobs to play, and if what Pineda said rings true, now will be the time to see who really wants to wear the badge and help the club regain some of its past status. Hope to see and hear everyone at the Benz this weekend loudly supporting the Five Stripes, regardless of the current status. In the meantime, and now that at least part of the story is here, be sure to let us know your thoughts below.