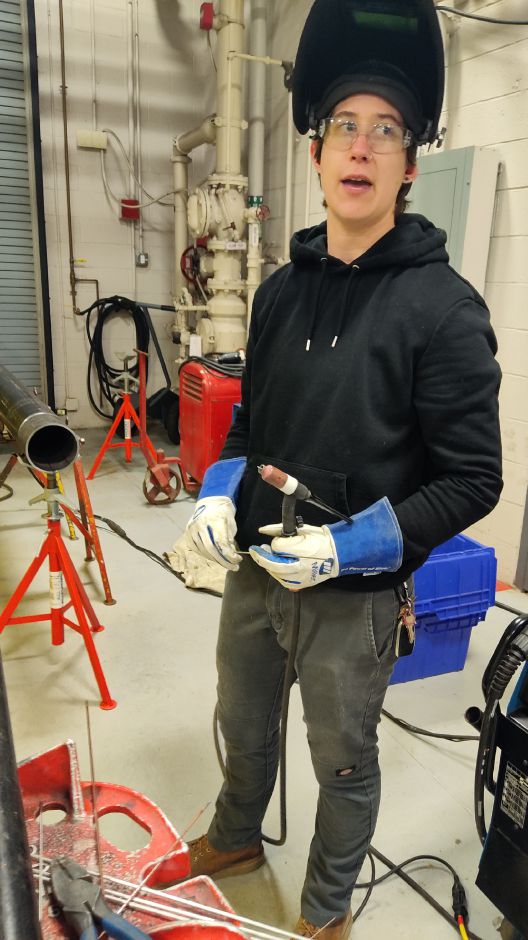 MERIDEN — Chloe Jackson of East Hampton was 30 when she realized she didn’t want a job sitting at a desk for eight or nine hours a day.

The communication arts major wanted to stand and use their hands.

“I changed course,” Jackson said. “I wanted to be a welder. It made me happy to create all those sparks.

Jackson is a third-year apprentice in training at UA Local 777 Training Center on Murdock Avenue and works in her trade for a New Haven company. She is happy to gain this experience and is confident she made the right career choice, she said.

Jackson and other apprentices shared their experiences at a Friday press conference hosted by the Connecticut State Building & Construction Trades Council to publicize the unions’ extensive apprenticeship programs. About 100 people attended the event, including contractors, union officials, and state and federal legislators.

CT Building Trades affiliates offer 17 joint apprenticeship training programs to provide workers with access to careers and financial stability. Union apprenticeships are remunerated and graduates complete their programs without any debt. The programs, which include welding, HVAC, plumbing and pipework, are run entirely by their respective unions and at no cost to taxpayers, union officials said.

Buell French, of Hartford, another third-year apprentice, was part of a program offered by the Building Trades Training Institute that conducts outreach to minority communities and underserved ex-offenders. French is now a building operations engineer, with a pension and benefits.

“Growing up, I made some bad decisions,” French told the crowd. “I had no job, no certificate. Then I was offered training. I was blown away by the countless hours and the machinery. But today, I’m about to earn more than ever in my life. I am a working class citizen, a taxpayer. I just closed my first house.

“This is an amazing opportunity for us in Connecticut,” Bysiewicz said. “We are about to replace 60,000 people in manufacturing and construction alone. We need more women involved so they can be part of this national movement. These are well-paying jobs. »

U.S. Senator Richard Blumenthal, D-Connecticut, sits on the Armed Services Committee where decisions about government contracts are made. When advocating for Connecticut companies such as Electric Boat or Sikorsky, Blumenthal is often asked “Are you going to get the people with the right skills?” Blumenthal told the crowd.

He also shared details about a new program called Helmets to Hardhats, which provides outreach services to returning and serving military to prepare them for the private sector.

“The construction trades are critical to our national security,” Blumenthal said. “We need to do a lot more to reach them.”