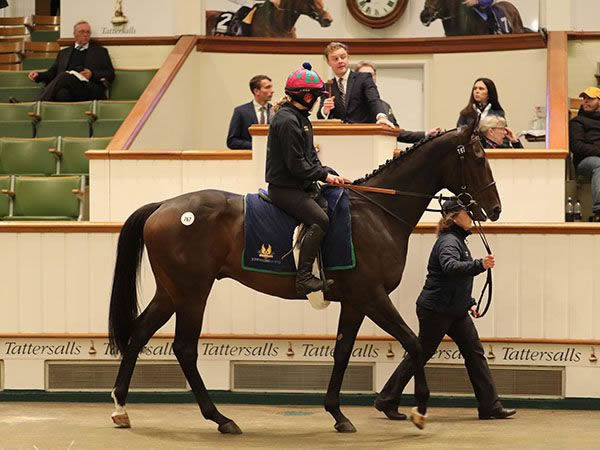 Top 850,000 batches at Tattersalls Horses on day two of training

The Charlie & Mark Johnston formed I’M A GAMBLER lit up the Tattersalls sales ring late in the evening when he was knocked down by Tim Cohen of Red Baron’s Barn & Rancho Temescal for 850,000 guineas, the third highest price never reached at the Tattersalls Autumn Horses in Training Sale. A total of nine lots sold for 300,000 guineas or more, resulting in double-digit increases in average and median turnover.

The star of the second day of the Tattersalls Autumn Horse in Training Sale was I’M A GAMBLER trained by Charlie & Mark Johnston. The son of NO NAY NEVER won the Listed Guisborough Stakes on his last start and was offered a Timeform rating of 117. Offers poured in from all over the ring, including from Wathnan Racing’s Olly Tait and the Najd Stud team, but it was Tim Cohen and the Red Baron’s Barn team comprising agents Alastair Donald, Joe Miller and trainer Mark Glatt who won at 850,000 guineas.

“It’s hard to find a solid 3-year-old and he’s one of the best rated in the catalog, physically he’s beautiful. Of course I didn’t want to go that far, but I didn’t go that far not to something worthwhile!”

Cohen had previously been underbid on the second most expensive PERSIAN ROYAL lot and added: “I definitely liked this horse more and the price reflected that for everyone. There are a few three-year-old stakes left this year in California. , but he’s had quite a few races so we’ll finish the year and then he can take a little break.”

He concluded: “He’s a quality individual, he’s already proven that, so if we can maintain that and improve on him, it will be even better. He doesn’t have much left to prove to me.”

Co-trainer Charlie Johnson said: “It was quite a theater because the bidders who seemed to be dropping out of the race suddenly came back for more! It just showed how much in demand he was. He’s a phenomenal physique, a beautiful horse, and he’s had no problems throughout his career, he’s an easy horse to train because he’s very healthy and very tough and he’s really come into his own over the last four or five This is a phenomenal result. Looking at the trade I thought it was going to make 400,000 guineas, maybe 500,000 on a good day, so the end result is pretty fantastic.

“Normally you wouldn’t sell good horses like that, but the reality is that I spoke to John Brown a few weeks ago and his dream campaign for next year would involve winning the Lennox Stakes. The horse comes to win five, six or maybe even seven times the prize money of this race for sale here. That leaves a huge hole in our yard to sell a 110 rated horse, but economically it was a logical move for the owner. 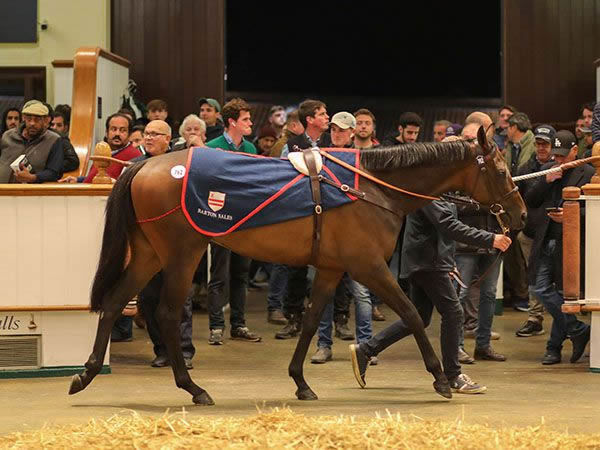 Qatar-based Wathnan Racing continued their spending spree at the Tattersalls Autumn Horses in Training Sale by securing PERSIAN ROYAL for 450,000 guineas, their eighth of nine purchases in the first two days for a total of 1,750,000 guineas . Australian Olly Tait made the bidding, sat alongside Qatari coach Alban de Mieulle and secured AL KAZEEM’s son despite a determined effort from underbid Tim Cohen.

Winner of four of his last five starts and ranked 99 by Timeform, Harry & Roger Charlton-bred PERSIAN ROYAL was consigned by Barton Sales and raced for Oakgrove Stud owner-breeder John Deer. David Hilton, manager of Oakgrove Stud, said: “It’s a strong market, the horse has done very well and has been well trained. To pass the assessments the way he did, few horses le do. He will suit the buyer. I have to say a big thank you to the home team, the coaches and Barton Stud for sending him off so well.”

Tait shared the latest and most expensive purchase so far this week for Qatar’s new racing entity Wathnan: “He’s a beautiful horse, his form is great, he looks progressive and he’s super consistent. season but also for the seasons to come.

“We came to buy enough horses for the stable to succeed, and of the quality necessary for the stable to succeed. You never know how things are going to turn out when you get here, you put a value on them and see how you go. Every sale of horses you get, you always have to pay more for some horses than expected, and for some you pay a little less.” 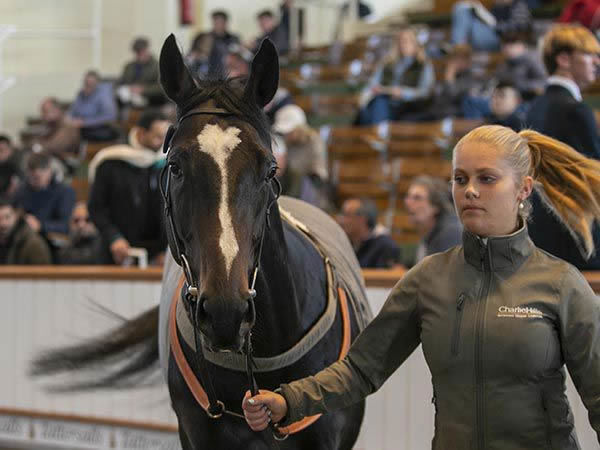 Earlier in the day, Qatari outfit Wathnan Racing had struck to secure the top-of-the-line three-year-old INVERNESS for 380,000 guineas. The son of HIGHLAND REEL won his last start at Haydock for trainer Charlie Hills and is rated Timeform 98, and he was bought on behalf of Wathnan Racing by Olly Tait, alongside Qatari trainer Alban De Mieulle.

“He’s got a very consistent and progressive form and he’ll go on firm ground,” Tait said. “He’s a horse that could hopefully be competitive in the Qatar Derby, he’s of that level of horse. He wasn’t cheap but that’s what you have to pay for a horse of that level. It is very strong-willed and its shape holds very well.

“There is a big racing program in Qatar and Wathnan Racing is very ambitious, looking for horses capable of winning races at different levels. In time, a wider campaign in the Middle East for horses could be on the way. radar.”

Kyeema Another Bound for Australia at 360,000 guineas 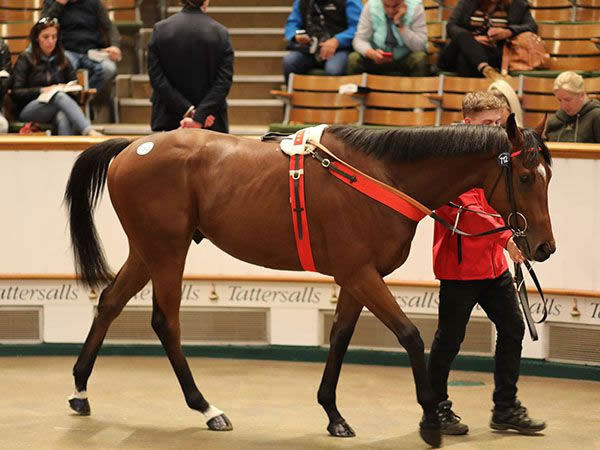 Australian interests played a dominant role in the Tattersalls Autumn Horses in Training Sale and another lot destined to ‘down under’ is the KYEEMA trained by William Haggas, having been bought by Roy Cheng of Domeland for 360,000 guineas. Cheng, who was bidding online, got the two-year-old gelding despite determined efforts from underbidners Wathnan Racing.

Bred by Haggas’ Somerville Lodge, owned by Miss Yvonne Jacques and bred by her stud Carisbrooke, KYEEMA was last seen finishing second by a head in the Listed Rockingham Stakes and was offered with a Timeform rating of 104. The colt SIYOUNI is out of a LAWMAN half-sister to Tattersalls Irish 2000 Guineas winner PHOENIX OF SPAIN.

Domeland representative Roy Cheng commented: “My boss really liked this horse – he will be going to Sydney, we are not sure of a trainer yet.” 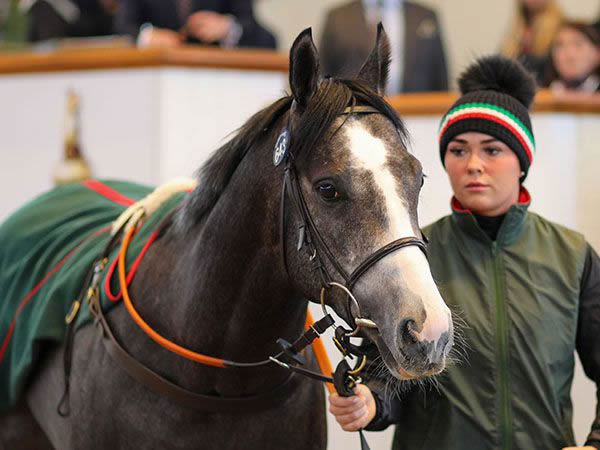 Two-year-old group winner EDDIE’S BOY was one of the stars of the Tattersalls Autumn Horses in Training catalog and it came to a head when he was knocked down by Al Wasmiyah Stud, bidding online for 320,000 guineas. Archie Watson, trained son of season one sire HAVANA GRAY, won the Group 3 Prix Eclipse handily two starts ago before finishing second in the Group 2 Critérium de Maisons-Laffitte.

Will Douglass of Charlie Gordon-Watson Bloodstock spoke on behalf of the successful buyer and commented: “He’s an absolutely cracking horse, he’s done all the dances this year and passed with flying colors, you can’t hitting what he did. He’s well made, strong and solid, and he’s going to do well in Qatar. I think he’s got the best 2-year-old form in the catalogue.

“He will first target the Al Rayyan Stakes which take place in mid-December and then the Al Biddah Mile in early February. We have managed to buy the winner for the past seven years, so there is no pressure!” you just have to look like solid, tenacious, genuine, direct, confident and pleasant horses, solid horses with a leg in each corner.”

Of the expedition plans to Qatar, Douglass said: “Plans are a bit on hold at the moment, but we have found it best to leave the horses here for the December race and bring them out. from the plane and then leaving them in Qatar for the subsequent race.”

EDDIE’S BOY proved an excellent standard bearer for his owners Middleham Park Racing who bought him with Blandford Bloodstock at the Tattersalls Somerville Yearling Sale for 45,000 guineas. Tim Palin, partner and racing director of Middleham Park, was delighted with the sale price.

He commented: “A purchase of 45,000 guineas at Tattersalls to sell today, there’s a certain synergy there. We’ve sold very well and it’s just a privilege to dine at the top table and to sell at the top table. Horse Like Him and The Platinum Queen show that even for the cheapest type of horse, if you team up and split the expense, you can hit the best spots. He’s been a fantastic success story under the guardianship of Archie.