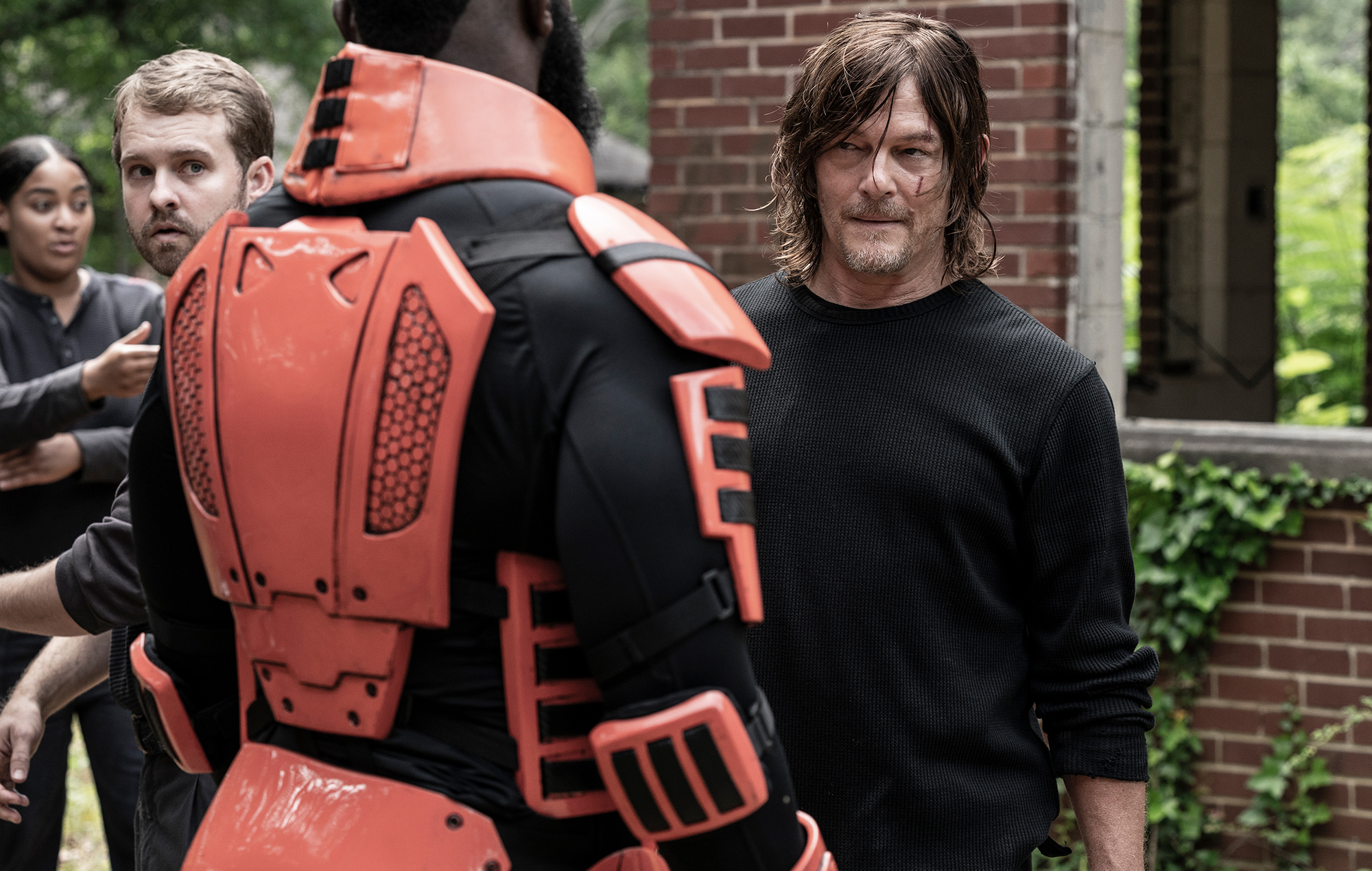 OWe have officially entered the Commonwealth era. The Walking Dead. After last week’s surprise time jump – which presented us with the surreal sight of Daryl (Norman Reedus) in full soldier’s uniform facing off against a dissident Maggie (Lauren Cohan) – it seems many of our survivors have gladly traded the brutality in the zombie apocalypse for the seemingly serene ways of this new community.

But what price will Daryl, Carol (Melissa McBride) and Rosita (Christian Serratos) have to pay to earn a living? And is there something deeply sinister lurking beneath the surface of this new sanctuary? ‘New Haunts’ provides some answers…

The Commonwealth knows how to celebrate Halloween!

What happened to The Walking Dead this week?

All the fun of the fair: We open at a Halloween carnival taking place in the Commonwealth, and everything seems oddly…normal? The kids run around happily, Carol cooks and watch: there’s Commonwealth Governor Pamela Milton (Laila Robins), who’s here to judge a costume contest and hand out “raffle tickets.” Elsewhere, Ezekiel (Khary Payton), who appears to be channeling Steve Irwin, is visibly uncomfortable but brushes off Carol’s suggestion that her thyroid cancer is taking its toll. Carol later learns from a Commonwealth doctor that although her ex-husband is awaiting surgery, he is unlikely to be treated before his cancer kills him. This forces him to seek help from Deputy Governor Lance Hornsby, who says they can help each other in order to get Ezekiel back on the waiting list.

Soldiers in training: Daryl and Rosita train to become Commonwealth soldiers. We see them participating in exercises led by General Mercer (Michael James Shaw), where they must team up with another newbie and “clear” a building using a single weapon with no guns per pair. Both Rosita and Daryl excel at the task, but are let down by their respective partners – Mercer is clearly aware, however, that these two can hold their own. Enter Sebastian Milton (Teo Rapp-Olsson), Pamela’s self-proclaimed son. During another drill, Sebastian struggles to take down a “rotten” and is bailed out in no time by Daryl – just as a sneering Pamela walks by to witness the desolate scene. Sebastian is furious and runs after his mother, leading Mercer to warn Daryl to play by the rules here – even if they’re crap.

Problem in the ballroom: The Commonwealth has clearly reached a point where it can almost convincingly claim that the outside world hasn’t gone through with the shit, so it’s no surprise to see Pamela throwing a fancy masquerade ball for the upper reaches of Commonwealth society. This glitzy event, attended by Yumiko (Eleanor Matsuura), Connie (Lauren Ridloff) and Princess (Paola Lázaro), is only accessible to a select few, however: Magna, for example, is just good enough to be on the staff of ‘waiting. One of her disgruntled co-workers seems familiar, though: Why, he’s the soldier who was kidnapped by Princess in Season 10’s “Splinter”! After his attempts to talk to Pamela – who also reveals in this scene that her late father was a former US president who wanted to “rebuild the world” after the fall of civilization – are shut down, the soldier, who goes by the name Tyler, interrupts the Governor’s speech and takes his PA hostage at knifepoint. Tyler explains that he lost everything after the Princess incident and accuses Pamela of seeing people like him as disposable. After saying his article, he spares the PA’s life and flees.

You say you want a revolution? Daryl gives chase and ends up cornering Tyler, who nearly slits his throat in anguish at his predicament. Daryl talks to him and arrests him, but then hands Tyler over to Sebastian so he can claim credit for apprehending the culprit – that’s playing by the rules, Daryl. Back in the ballroom, Tyler shouts “resist the Commonwealth, visibility for workers, equality for all!” and warns that there are “thousands” more like him. Pamela asks Hornsby if that might be true, but he downplays it in a way that’s not entirely convincing. The episode ends with another flash-forward to “Day 33 in the Commonwealth”: Rosita, now in a soldier’s uniform, raids an apartment building. She discovers a secret back room that is filled with resistance material with slogans that match those Tyler shouted at the prom, confirming that all is not well in the Commonwealth.

The most dangerous walker of the week:

Ass-kicking Commonwealth soldier-in-training Rosita takes top honors this week for ripping off a walker’s rotting leg and fatally stabbing her in the skull with the leg bone shattered . Pleasant.

This week’s big question: which of our heroes will join the Commonwealth resistance movement?

To no one’s surprise, all is not as it seems in the Commonwealth. They may have a semblance of a working society, but not everyone is happy – particularly in terms of the class divide which Magna (Nadia Hilker) says has left the Commonwealth comparable to “a city before”. the apocalypse. While Daryl and Rosita are among those who willingly joined the ways of the Commonwealth, which of our heroes will smell a rat and join the dark side of the resistance – or are they on the good side? The vagueness between hero and villain could become very interesting in this last season of The Walking Dead…

Season 11 of ‘The Walking Dead’ airs weekly on Disney+