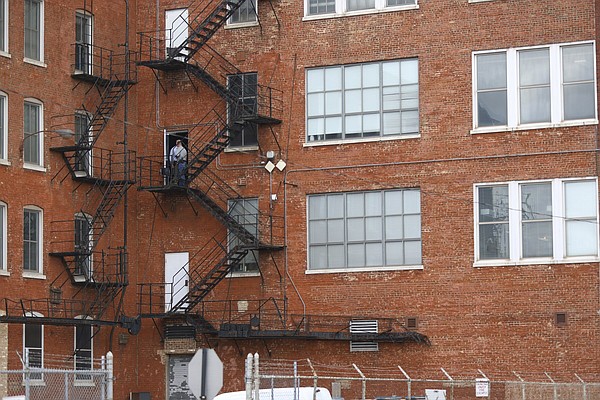 CHICAGO – A man climbed five stories of an emergency exit to infiltrate a Chicago police station on Monday as officers completed a SWAT training exercise and seized at least two firearms before being shot and injured by police, the chief said.

Brown said the suspect was seen on video leaving the facility and then returning to break into it. He asked where to go to collect personal property from the Homan Square facility on Chicago’s West Side. Then he returned to the building and climbed the fire escape to the fifth floor, where a door had been held open for ventilation as there are no windows on that floor.

Brown said it had not been determined whether the man had gone to the building to collect property, saying the man had an extensive criminal record. It was not immediately clear if the property taken from the man was stored in the building.

He had no other information about the man other than to say he was a resident of Waukegan, a suburb about 42 miles north of Chicago.

Brown said investigators believe the man grabbed at least two firearms that were on a table during the training exercise and pointed them at officers. He said the firearms did not contain live ammunition, adding that they were either empty or contained non-lethal ammunition used for training exercises that sting when hitting a person but do not cause serious injury or harm. of death. He said he did not know if the man had attempted to shoot officers with the guns.

He said the investigation will reveal what the officers in the room knew about the weapons the suspect took.

Brown speculated what officers in the training room saw when the man entered the room.

“These were weapons that were monitored,” he said. “Obviously someone coming from a stairwell outside surprised everyone. Who is this person? Is this person associated with the training? We sometimes have live actors who come in civilian clothes.”

He also said it was likely officers said something to the man when they spotted him, but “we just don’t know what the assailant said.”

The officer with an ankle injury was taken to Mount Sinai Hospital in stable condition, according to the Chicago Fire Department. He was not shot, Brown said.

The suspect was initially described as being in critical condition with at least one gunshot wound. Later that day, Brown said the man’s injuries were not life-threatening. Department spokesman Tom Ahern said the man was taken into custody and is in police custody at the hospital because he was a suspect in the incident. He didn’t know what specific charges he might face.

The police facility is in a large red brick building which houses evidence and recovered property on the first floor. Some of the police department’s specialist units also work from the building.

Early Monday afternoon, crime scene tape was strung across South Homan Avenue, one block south of the police station and on the same street just north of the building.

A nearby school has been placed on lockdown.