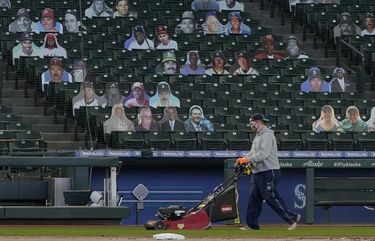 MESA, Ariz. — The Mariners have announced that the 2021 alternate training site will be held at T-Mobile Park.

A year ago, the Mariners held their alternate training site, which ran from July through September, at Cheney Stadium in Tacoma.

But with unpredictable Pacific Northwest weather in April, the Mariners opted to have their players practice at the stadium to take advantage of the retractable roof.

“I heard it was raining in Seattle, so we have a roof over there,” Mariners manager Scott Servais said before laughing at his own joke. “So I think from a training perspective it made more sense to make sure you keep those guys where you don’t have to deal with the elements as much. It will have its challenges.

The biggest challenge is the need for additional space for the clubhouse / locker room as well as the training schedule. Players who are on the alternate site are not permitted to use the facility at the same time as players on the active MLB roster. Thus, players relegated to the alternate site will have to work at varying times depending on the major league team’s use of the park.

“They’ll be in there at weird times,” Servais said. “They will be there early in the morning when we have a night game, and if we have a day game they could be there later or early in the evening. When we go on the road, everything is open at that time. It was just the most logical. Just from, you know, logistics and weather and setup and everything that’s included to get the guys from T-Mobile.

Servais was unsure how many players he would send to the alternate training site, but mentioned around 20-24 players.

But the Mariners face a dilemma. Lack of numbers at the ATS won’t allow for more than a handful of simulated games per week. And with no team within driving distance to play against, simulation games or modified intra-team scrums will be the only game representatives available. In the Bay Area, the Giants and A’s plan to play four games a week against each other at their alternate training site.

“We don’t have that luxury,” Servais said. “You have to stay close enough to the major league team within driving distance and we certainly don’t have a team close enough in the Pacific Northwest, so that will create some additional challenges, but again. COVID has created all kinds of challenges for everyone, so we’re going to work on it, we’ll have our guys ready, there’s always going to be a crew of taxis that will travel with us when we’re on a road trip, that will have four or five players there -down so that if something happens you can activate them and plug them into your roster.

The Mariners are trying to decide if it’s better for prospects such as Julio Rodriguez, Jarred Kelenic, Cal Raleigh and Logan Gilbert to stay in Arizona where there will be minor league spring training games starting in half April.

“We’re trying to sort that out and figure out who would benefit the most from being here versus who should be at the alternate site and just training,” Servais said. “Certainly the level of experience is a factor. I would tend to think it would be better, more beneficial for younger players to stay here and play games. But we’ll see how it all plays out.

The Mariners are trying to schedule games against other teams in Arizona for that two-week span, using players who were at MLB camp but not on the day one roster.

“Every organization is in the same place as us. They send guys out of the major league camp who are game-ready,” Servais said. “So you don’t want to step back and wait two or three weeks before all of your minor league players are ready to play. I think a lot of organizations are trying to sort of schedule games here as soon as we leave with some of the players who will be left behind.

When will players be vaccinated?

With restrictions on who can receive the COVID vaccines opening up and available to anyone over the age of 16 after May 1, Servais was asked about registering his players to receive the vaccine. He often said they wouldn’t jump the line to get them. But will they line up now?

Servais had not yet had a team meeting or discussion with his players. The state of Arizona last week opened vaccine availability for anyone over the age of 16.

“It’s an individual decision whether people want to go ahead and get vaccinated or not,” he said. “We just have to wait and see how it goes and when it might be accessible to our players. If our players want to get one because they’re eligible now here in Arizona, obviously you’ll have to get the second shot in Washington or on our schedule. So there are logistical challenges there, but again, it’s an individual decision.

“It would have been a DH game anyway,” Servais said. “We decided to give it another day. We have back-to-back home night games here on Friday and Saturday. We expect him to be in the lineup tomorrow.

These tickets are on sale at Mariners.com/tickets. They will only be available in pods of 1-6 fan members of the same household.

206-464-2373 Where [email protected]; on Twitter: @RyanDivish. Ryan Divish covers the Mariners in Seattle and on the road. Look for his “Extra Innings” podcast and his weekly Sunday mailbag during the season.
alternate traininglos angelesmajor leagueminor leaguetraining site
Share FacebookTwitterGoogle+ReddItWhatsAppPinterestEmail