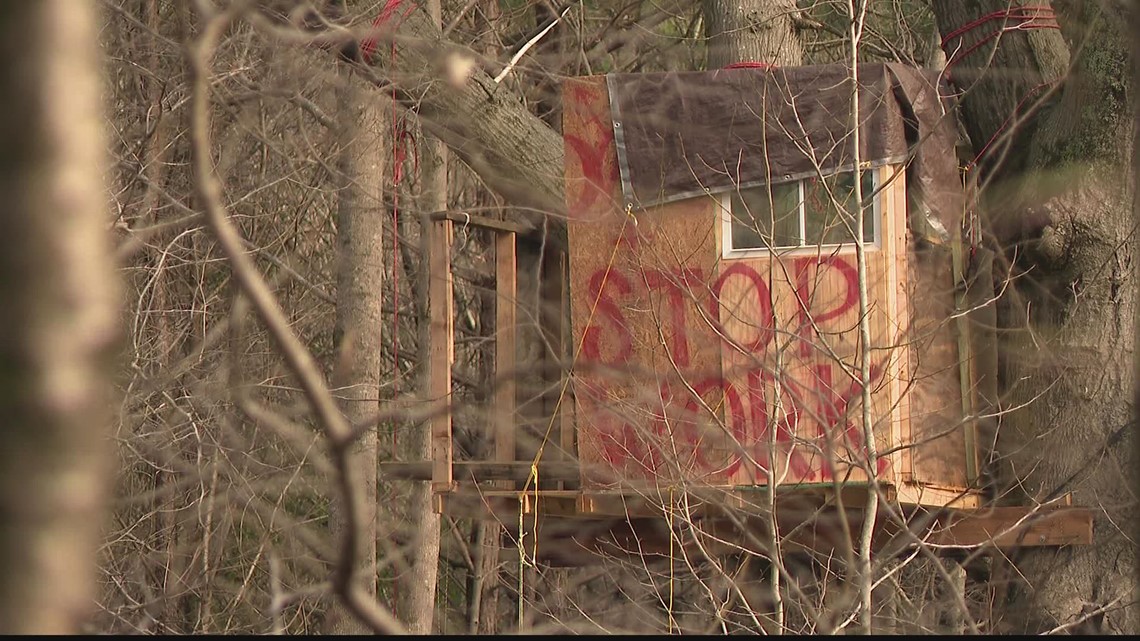 Protests against construction of APD training site in DeKalb County

A group of activists have been living in the woods since December trying to stop the construction of the Atlanta Police Training Center in Dekalb County.

DEKALB COUNTY, Ga. — Some activists are taking an unusual step to try to prevent the construction of a new police training facility by camping in nearby woods and building treehouses.

They said their goal was to round up enough people to stop the city of Atlanta from moving forward with its plans.

Protesters said they have been on site in the South River Forest in Dekalb County, living in the woods, since December. And in those three months, they said their numbers had increased. While 11Alive was there most were in hiding, but one protester agreed to speak with our team to spread the word.

“We were here during the freezing winter when there were these huge storms,” said the protester, who calls himself “Coyote”.

Coyote showed 11Alive the treehouses and tents they live in to physically prevent Atlanta from building their new training facility.

“People have built barricades, so there are barricades on some paths to prevent bulldozers from entering,” he added.

Coyote said the group felt the facility was bad for the ecology and instead wanted the land to revert to the Muscogee tribe. In general, they do not support any police training center anywhere.

The new state-of-the-art training facility would cover 85 acres in the South River Forest and replace an older training building that had roofing, plumbing and mold issues.

The Atlanta Police Foundation is leasing the land from the City of Atlanta to build the facility later this year.

The Foundation tells 11Alive that it is aware of the intruders, who allegedly chased their workers from the site and destroyed construction equipment.

Coyote says his group is non-violent, he said they just want green jobs in place, not the police.

“Restoring soil, repairing plant species and bringing animals back is something anyone can do,” Coyote said.

11Alive asked Coyote who pays for this? He replied, “I don’t know, these are some kind of dreams.”

Atlanta police said they are working with DeKalb County to deal with the intruders.

The City of Atlanta said the project creates a modern training center while preserving a huge amount of land as green space.