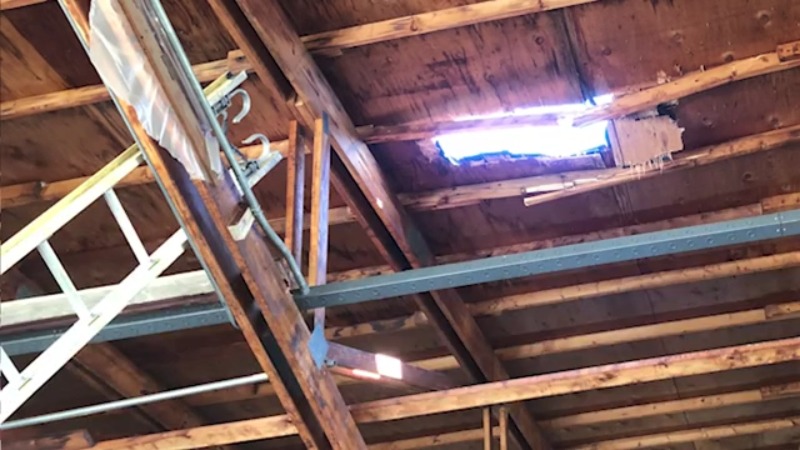 TROY TOWNSHIP, Ohio (WJW) — Two skydivers are recovering after colliding in mid-air and then crashing through the roof of a practice building on the Cleveland Skydiving Center property on Saturday.

Authorities say they were summoned around 2:30 p.m. Saturday, which was a near-perfect day for skydiving.

“We spoke to witnesses and it was reported that the two skydivers became entangled about 150 to 200 feet in the air with their parachutes. Just before reaching the roof, they had separated where they had went through the roof in two different places,” said Troy Township Fire Chief Eric Mathews.

“There happened to be someone walking through that barn or that building at the time and one of the paratroopers hit him as he was going through the barn,” said Geauga County Sheriff Scott Hildenbrand.

The other skydiver was caught in the rafters of the building and lowered by passers-by who used a ladder to reach him, according to Mathews.

The paratrooper who landed on the ground was airlifted to a hospital in Cleveland. The person it landed on was transported by ambulance to Geauga County Hospital.

The sheriff says the paratrooper who was stuck in the rafters refused transport, saying he would ask friends to take him to the hospital for an evaluation.

The skydiving center is proud of its safety record. Owner Marcie Anne Smith shared a record-breaking event with FOX 8 in July, in which 48 individual skydivers held a formation for ten seconds after diving from three separate planes.

“Both skydivers had thousands of skydives themselves and hundreds of skydives with each other and were under fully functional parachutes at the time of the collision,” a statement read in part. “It was completely out of the ordinary and unexpected. We are very lucky and happy that our friends were safe and were able to get away with only minor injuries.

‘Bittersweet day’: Body of police ID boy found in suitcase in Indiana; 1 person in custody, another on the run

She said repairs were underway in the hangar and skydiving operations resumed as normal the next morning.

Sheriff Hildenbrand says one of the paratroopers told first responders at the scene that they were possibly traveling at 90 to 100 miles per hour when they crashed into the roof.

“Usually you expect the absolute worst and you hope for the best and this was one of the cases where we expected the worst and we ended up with a much better result than what we were sent for, which on our side is always a good thing,” Mathews said.