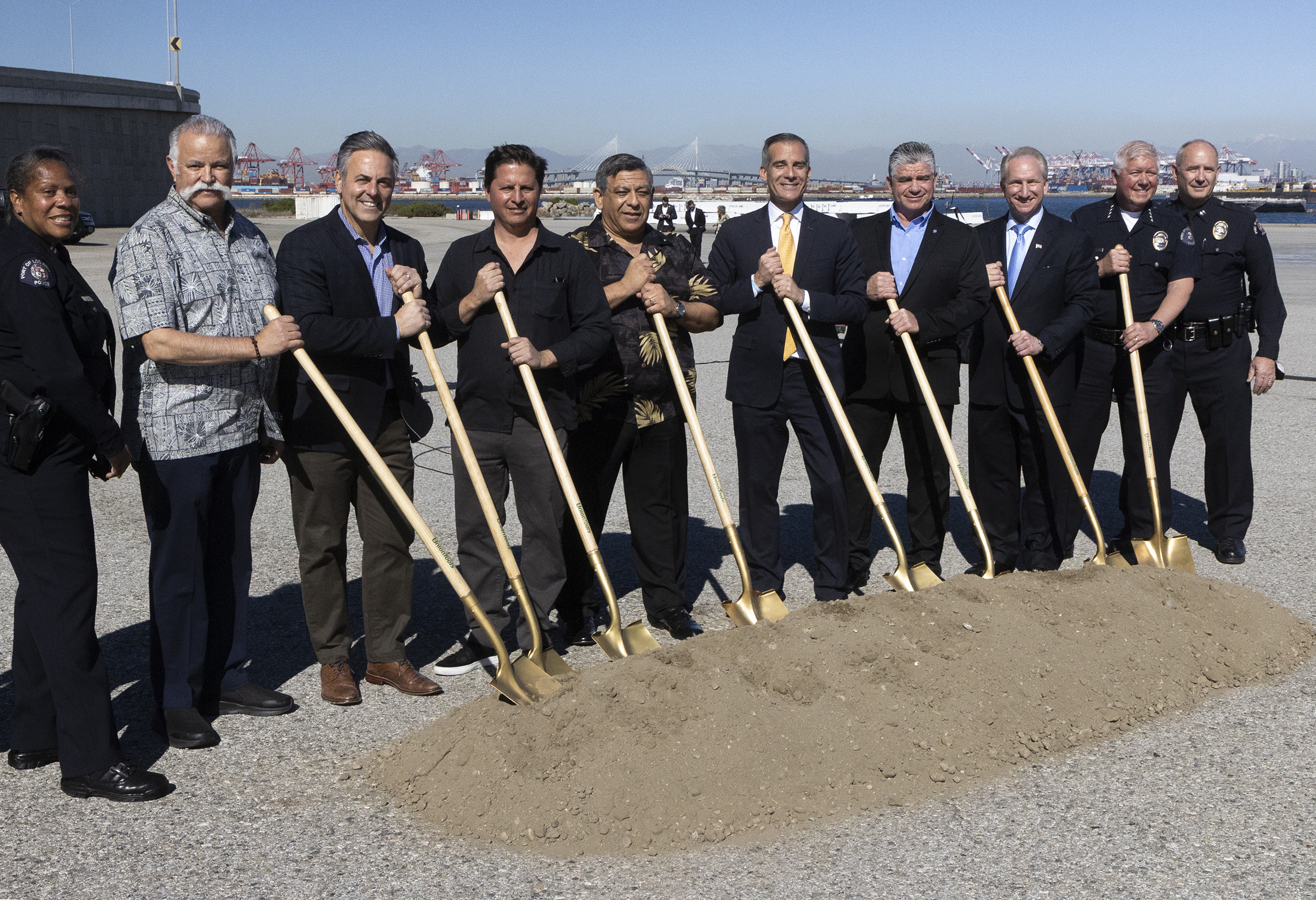 With the sound of nearby container trucks and seagulls flying overhead, Port of Los Angeles and county officials celebrated the grand opening of the first cargo movement training center on Friday afternoon.

Located on a vacant lot near APM Terminals on Pier 400, the Western Hemisphere’s largest container port terminal, the project will include the construction of a steel structure that will facilitate the training process, Mark Jurisic, relations representative working for ILWU Local 13, told the Business Journal.

“It’s going to be designed with working bays so we can actually bring equipment that [dockworkers] are currently working on the job,” Jurisic said. “And we can bring in new equipment so we can teach people who want to learn…or hone the current workforce.”

The facility is expected to be ready for training in March 2023, according to Pacific Maritime Association Vice President Chad Lindsay. The price for the installation is between $15 million and $17 million, Lindsay added, which will be covered by port employers, not government funds.

The land for the project was provided by the Port of Los Angeles.

The training center is expected to provide maintenance, repair, upgrading and retraining training to 900 registered stevedores and mechanics working in the San Pedro Bay port complex, which includes the ports of Los Angeles and Long Beach.

“We know that a strong port starts with a strong workforce,” LA Mayor Eric Garcetti said at a press conference. “These things don’t move automatically. It is the human beings who show up every day to work on these wharves, to build this port, who have made this American port.

The inauguration took three years of negotiations and effort between the PMA and three local unions – ILWU Locals 13, 63 and 90 – Local 13 President Ramon Ponce de Leon said during of the press conference.

“We can work together and move members to other jobs,” Ponce de Leon said, noting the industry’s shift toward electrical equipment. “Training is important to keep community workers employed. Employers recognize this and put money into it.

The Quai 400 training facility will be temporary, Jurisic said. Plans for the future permanent training facility are still underway, but a site in the San Pedro Bay port complex has been identified for a 20-acre facility with room to expand, according to Jurisic.

Long Beach Port Executive Director Mario Cordero described the project as “exciting” during his annual State of the Port Address earlier this week. Cordero said the facility is part of the port’s workforce development and educational outreach efforts, which include a partnership with the Long Beach Unified School District, internships summer and scholarships.

“[The permanent facility] is going to be all-encompassing – not just upskilling and retraining, it’s going to be all-encompassing of all the jobs we’re currently doing,” Jurisic said, noting that it will also feature large cranes for training, which the temporary site cannot accommodate. “The idea is that we will re-skill our workforce to be more efficient, more productive, so that we can respond better to the economy.”

In January, Governor Gavin Newsom unveiled his proposed state budget, which included $2.3 billion for ports in the state. Of these funds, $110 million was earmarked for the construction of the permanent training center.

At Friday’s press conference, Garcetti said he hopes San Pedro Bay ports will receive up to $5 billion from Biden’s historic infrastructure bill. This figure would represent almost a third of the $17 billion allocated to the country’s ports in this law.

“We hope to match what the state is investing in this training facility with federal funds,” Garcetti said, “to be ready here to show America what the future of our economy and our competitiveness looks like. “