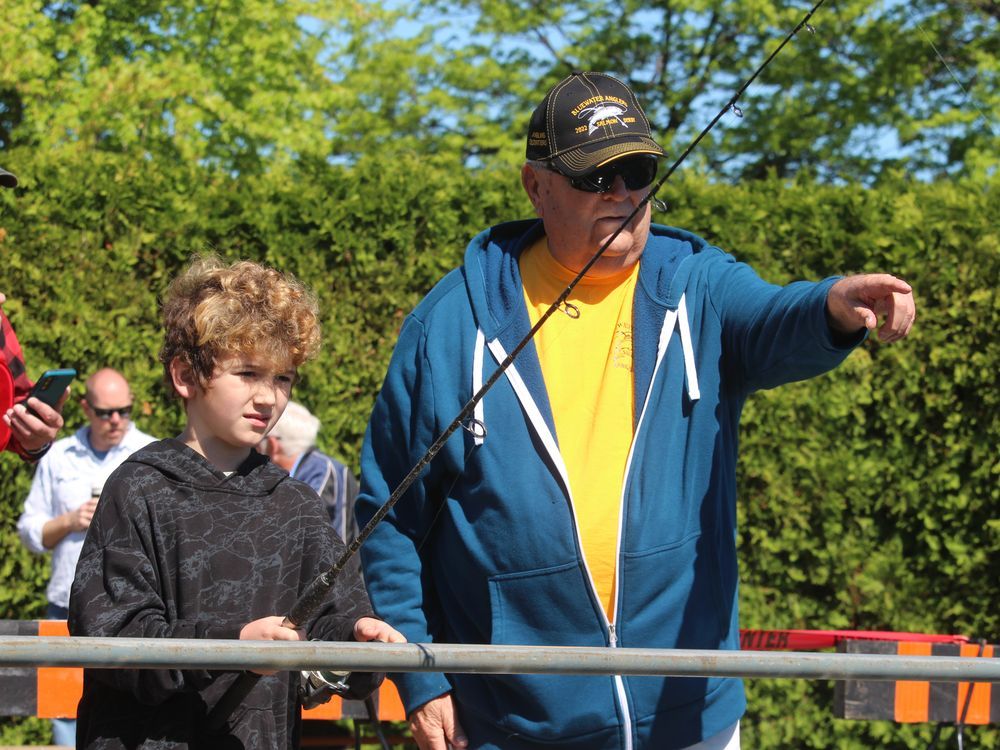 The young anglers were hauling them in at the pond outside the Bluewater Anglers hatchery on Saturday in Point Edward.

More than 100 young people signed up for the group’s annual children’s training day where they learned how to fish and how to stay safe around the water.

In addition to fishing club volunteers, the day included local firefighters and representatives from the Ministry of Natural Resources.

Groups of young people walked the program between 10 a.m. and 2 p.m.

Klazinga said about 20 volunteers taught them how to cast a line with a fishing rod and how to tie a fishing line.

“And then they can catch a fish in the pond,” he said.

“There are big ones, small ones. If you get one, it’s a bonus.

The small pond next to the hatchery holds rainbow and brown trout where visitors can buy food from vending machines and dump it into the water through an opening in the fence.

The club has been running a kids’ practice day for a dozen years to encourage the next generation of anglers and promote water safety, he said.

“We have water on both sides of town,” Klazinga said of the community’s location on Lake Huron and the St. Clair River and the need for safety training.

Saturday’s event was the club’s first day of training since the pandemic began two years ago and restrictions have limited public gatherings.

“We are very excited to have been able to do it again,” Klazinga said.

The charity, Friends of the St. Clair River, attended Saturday’s event and donated $5,000 to the club’s school hatchery program.

“We probably have a dozen schools where we’ve set up an aquarium,” Klazinga said. “They get 30 eggs and the kids watch the eggs hatch” and feed the fish as they grow.

“It’s a pretty exciting program,” he said. “A lot of schools want to be on board.”

In the spring, fish raised in the schools are released into local waterways along with the thousands of rainbow trout, brown trout and salmon raised by volunteers at the hatchery.

The hatchery has continued to operate during the pandemic with the help of a group of volunteers who spend several hours working there each day, club president Ralph Eves said.

“It was never down at all,” he said. “The guys have done a really good job keeping it going.”

The club’s annual Salmon Derby also returned this spring after being postponed for two years due to the pandemic.

Derby organizers aim to raise enough money from the event to cover half of the hatchery’s annual operating costs.

“It was great this year – great turnout,” said derby co-chairman Paul Heckley, who was volunteering on Saturday.

Around 1,185 tickets for the derby were sold, making it “our second highest ever”, he said.

“They came back well after two years of cancellations,” Heckley said. “We were pleasantly surprised by the turnout.

Club members are still working out expenses and calculations to work out how much the derby has raised, but “we should be doing well,” he said.