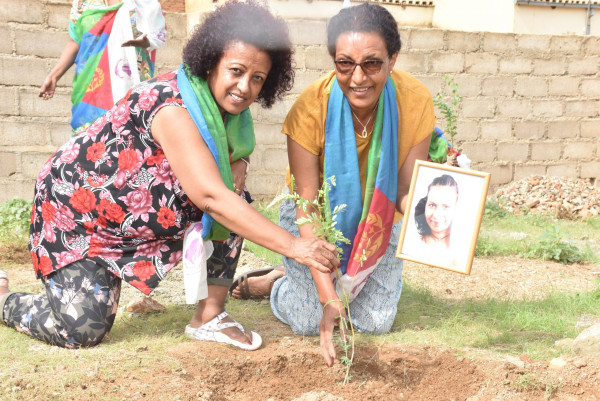 Inauguration of the Teseney training center

A training center worth 33 million nakfa sponsored by the Swiss branch of the National Union of Eritrean Women was inaugurated on July 28 in Teseney.

The inauguration ceremony took place in the presence of Ms. Leul Gebreab, Minister of Labor and Social Affairs, and Colonel Yonas Bitxuamlak, Commander of the North West Border Command, as well as other guests.

Speaking at the event, Ms. Tekea Tesfamicael, President of the National Union of Eritrean Women, indicated that training centers aimed at developing the comprehensive capacity of women have been established in all regions with the cooperation of nationals at home and abroad, commended the contribution made by the Swiss branch.

Mr. Gebreselasie Negash, Director General of Administration and Finance of the region, for his part declared himself ready to play his role in enabling the center to achieve its objective.

Ms. Tirhas Tewolde, head of the Swiss subsidiary, said she was satisfied to see that the project is finalized and ready to operate.

The training center includes a meeting room with a capacity of 500 people, a training room, five offices and 10 latrines.

Distributed by APO Group on behalf of the Ministry of Information, Eritrea.