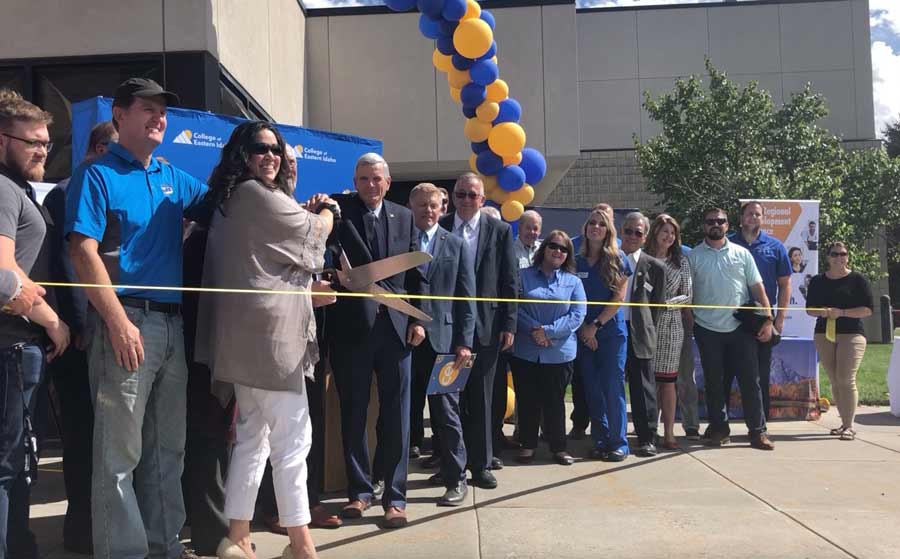 IDAHO FALLS – The College of Eastern Idaho, county and city officials, business owners and community members celebrated the completion of the workforce training center from eastern Idaho on Wednesday afternoon.

During a ribbon-cutting ceremony at 101 Technology Drive in Idaho Falls, IEC President Rick Aman told those in attendance that the building’s purpose was to provide professional development and enhance career opportunities. for the CIS community and students, as well as “to improve the pipeline of industry-ready students.

An increase in construction and business development projects has created a huge demand for skilled workers in eastern Idaho.

Although many high school students go on to college after graduation, Aman says learning a trade allows you to enter the workforce with a well-paying job much sooner.

“You can always work on a degree while you’re on the job,” says Aman. “A big part of what we’re trying to do is convince anyone who’s interested…in these kinds of jobs.”

Another industry benefiting from the training center is law enforcement.

Bonneville County Sheriff Samuel Hulse said the number of applicants for the sheriff’s office is much lower than before. The office plans to train new recruits and pique their interest. He is also working on a vocational training program for ex-convicts transitioning into society.

“Depending on how long a person has been incarcerated, things have changed a lot (with technology). And very often they haven’t had the opportunity to develop a skill,” says Hulse. “With a criminal record and no marketable skills… it can be quite difficult to find a job.”

Along with this, the Sheriff’s Office wants to help inmates who are serious about making better lifestyle choices get job training while they’re still in jail. The idea is to restart the transition process for some inmates. They went to class during the day and returned to the prison at night.

The program is in the initial planning stages and will involve the justice system. Hulse hopes that can start next spring.

The center is a project that began to materialize about six months ago, but the concept was first suggested in the 1990s. Bonneville County Commissioner Byron Reed told the crowd that the ex-Commissioner Cliff Long first proposed the idea.

“At that time, several people were being laid off from the Idaho National Laboratory, the economy was in crisis, and he was worried about what would happen to these displaced workers,” Reed said.

A community member donated the property where the training center now stands, and Long worked with the mayor to secure an economic development grant to help fund the project.

Long worked with Bateman Hall Construction to get it built.

“Coincidentally, our advisory board is now chaired by Aaron Johnson, who is with Bateman Hall. So it’s ironic that they built the building over 20 years ago, and here we are now,” Reed said.

The INL leased the building from the county for many years. It was offered to the IEC earlier this year on the condition that it be used for workforce training.

“We value County Commissioners so much. These are expensive buildings. It’s exactly the kind of building we would build if we had the funds, so it’s exactly what we needed at the right time. We are very excited about it,” says Aman.

Prior to the grand opening, the Regional Development Alliance, Inc. presented CEI with a check for $727,865.73.

Community classes will begin the first week of October, but the facility will not be fully operational until February.