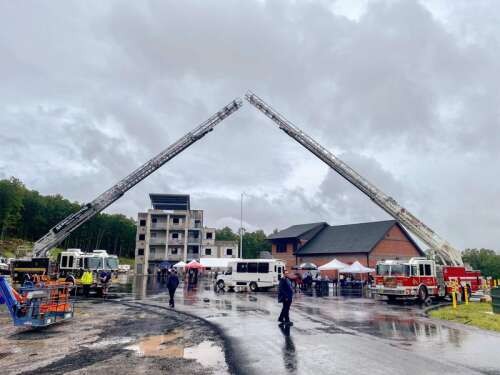 Like a phoenix rising from the ashes, Sunday marked the next chapter that will allow firefighters, police and other first responders to prepare for emergencies without leaving Carbon County.

Nor did the rain stop various fire companies, law enforcement, elected officials, friends and family from gathering on the Broad Mountain in Nesquehoning to ring and celebrate the fire operations training center. emergency almost over.

The $10 million center has been in the works for more than a decade.

Fittingly, the new center was named after a firefighter with over half a century of experience, who was the driving force behind the project.

Nothstein, now in his sixth term – the longest-serving county commissioner in Carbon County history, was also a firefighter in Lehighton for most of his life and knows the challenges faced by emergency responders. emergency in case of emergency and training.

O’Gurek, who was on the board when the project was announced in February 2015, praised all the agencies involved in the project.

“I thought there can be no county that compares to this in the source of the dedication we have in our fire departments and emergency personnel,” he said. “I truly congratulate each and every one of you. … This is the day we dedicated a gift to you and the people of Carbon County to make us safer, to keep us safe for a long time to come, and to that the county remains one of the best of all time.

O’Gurek paid tribute to several municipal, county and state officials in attendance who helped make this dream a reality.

“Carbon County, a deep-rooted community with a long tradition in emergency service organizations, is delivering on its promise of a safer future with the construction of the County of Carbon County Emergency Operations Training Center. Carbon,” Yudichak said. “(It is) a living, working monument to the greatness of the American spirit and a true reflection of the respect and admiration the citizens of Carbon County have for the first responders who keep our community safe. Simply put, this state-of-the-art facility would not have been built without the unwavering determination of Commissioner Wayne Nothstein, who has been the first responder here in Carbon County for over 50 years. Congratulations to you and your fellow commissioners, past and present, who have persevered in your commitment to ensure our first responders have a first-class place to train.

“It’s a dream come true for our first responders.”

“I remember when this project was in its infancy,” Argall said. “My first thought was good luck finding all that money. But Wayne, you and the board commissioners, past and present, never gave up…and that made all the difference.

“You never know what they’re going to go through when they step onto a scene…that’s why this training facility is so important,” Heffley said. “And why we worked so hard to help Wayne achieve this.”

O’Gurek introduced Nothstein, who started talking about creating a centralized training center in 2008.

“It’s a very tough day to see something like this happen after so many years,” Nothstein said. “…It was always a dream and finally, here we are sitting looking at this building.”

He said he felt guilty that the building was dedicated to him because he wasn’t the only one who made it happen. He commended his fellow first responders, Boards of Commissioners, various agencies and officials, and construction crews for making this a reality.

“It all started in 2008 with a vision… This is about them, the first responders. These are those committee members who have seen the value in something like this and know the importance of training. You don’t send a doctor into an operating room without training. You don’t send a soldier to war without training. Nobody just walks into a field and knows how to do these things. You cannot train by entering a burning building. It’s too late then.

“It’s about the firefighter’s safety, making sure they know what’s going on.”

Members of the training committee gathered as Nothstein, donning his firefighting gear, used a Hurst Jaws of Life to cut the handcuffs and hose, officially opening the center for first responders.

Nesquehoning and Lehighton ladder trucks create an arch at the entrance to the new Nesquehoning Emergency Operations Training Center, which opened on Sunday. For more photos, see the gallery on tnonline.com. AMY MILLER/TIMES NEWS

Carbon County Commissioners Chairman Wayne Nothstein cuts the “ribbon” created with a hose and handcuffs, complete with a hydraulic rescue tool to officially open the new $10 million training facility. He is surrounded by members of the training center planning committee.

A view of the new burn building that firefighters can use to practice for various emergencies. AMY MILLER/TIMES NEWS

Chairman of the Commissioners Wayne Nothstein addresses the crowd at the ribbon-cutting ceremony.

Responders have a new place to train