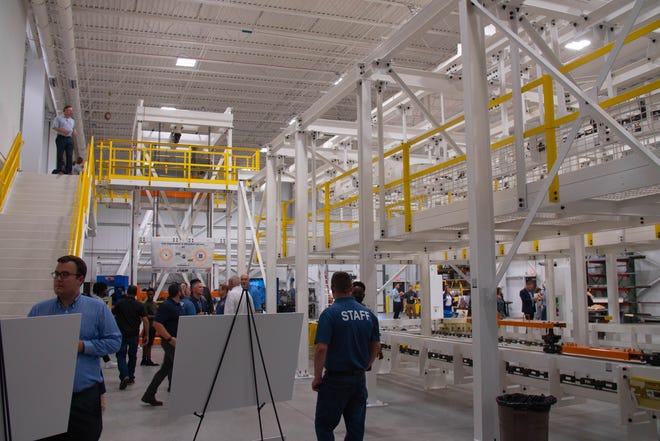 Detroit – A year later than expected, the Michigan Regional Council of Carpenters and Millwrights on Wednesday opened a training center that state and city officials say will provide opportunities for Detroiters and boost Michigan’s competitiveness.

Governor Gretchen Whitmer and Mayor Mike Duggan were among those celebrating the completion of the $60 million, 145,000 square foot training facility on the city’s west side that will provide free skilled trades training for up to 1,500 students per year through an apprenticeship program taught by the Carpenters and Millwrights Union.

“It’s a day that the people of Detroit have been waiting for for a long time,” Duggan said at a press conference. “Most of the construction in this area has been in the suburbs.” He said Detroit residents were locked out of trades and access to apprenticeships because of the distance between construction sites and the city.

“I wanted to make sure as we go back (construction in Detroit) that people in Detroit have access to those jobs,” Duggan said. “Now young people are going to be on the right path to well-paying jobs for the rest of their careers.”

Whitmer said the facility will benefit city residents and help it reach its goal of having 60% of working-age Michiganians graduate with a post-secondary skills certificate or degree by 2030.

“I love that it’s in Detroit,” she said. “Michigans may not realize it, but every day we all rely on the carpenters, millwrights, floorlayers, pilers and all the skilled trades who build our infrastructure.”

“It’s not just about numbers, it’s about people, it’s about lives, it’s about building an economy that creates opportunity for everyone and it’s about making sure that there are phenomenal training opportunities like this represent,” said Whitmer.

The plans for the training center have been announced in March 2019 and construction began in July 2020 on the site of the former Tappan School near Oakman Boulevard.

The training facility is the third and largest of three built in the state since 2019 by the Architectural Contractors Trade Association of Michigan; the others were built in Wayland, Allegan County, and Negaunee, in the Upper Peninsula, said Donna Pardonnet, the association’s executive director.

Vancey Pruett II, a third-year apprentice, said it’s amazing to have carpenters, floor layers, millwrights and others under one roof and able to support each other.

“I encourage anyone who thinks this might work for them to give it a try because you might find where you belong and things you love to do, just like me,” she said.

MRCC Executive Secretary-Treasurer Tom Lutz said there’s never been a better time to join the skilled trades. “Our apprenticeship is the other four-year degree, but there’s a big difference, in this one, you don’t accumulate student loan debt; in fact, you earn while you learn,” Lutz said. .